Keep Your New Year Resolutions by Flossing One Tooth!

How Flossing One Tooth Can Help You Keep Your New Year Resolutions!

Keeping my New Year resolutions is the last thing on my mind as I stare at my dentist with a sheepish look on my face. I have a cavity in between my front teeth and she has just asked if I floss. I’m a successful, confident career woman and yet this simple question has me a little flustered.

Yes. Most of the time. Nearly always. I just about choke on my answer. She gives me a knowing look.

A little embarrassed by the interaction, I walk away mentally sketching out an ambitious plan to completely overhaul my oral health routine. I vow to brush after every meal, for a minimum of three minutes. I’ll drink only water instead of sugary drinks or alcohol. I’ll stop grazing in between meals and chew gum instead. And I’ll completely remove sweet, acidic and sticky foods from my diet!

We’ve all been there. When presented with a problem that requires behaviour change, we attack it with big goals — only to find ourselves locked into a self-defeating cycle. Society programs us to “go big or go home”. But big goals can feel more burdensome than motivational. They require an often-daunting amount of effort to accomplish and even more to sustain in our time-poor lives. When we fall short of achieving these lofty goals, it can create a negative spiral of disappointment and discouragement, which in turn deters future action. One step forward, two steps backward.

While it’s great to dream big, the way to actually achieve big is to start small — through tiny habits. Tiny habits are simply small elements of a larger habit. By breaking down an ambitious goal into smaller, more achievable tasks that you achieve over longer periods of time, you can complete your big goals with less stress and effort.

For example, my last year’s goal was to run a half marathon. My initial approach was to launch into a hard-core running program designed to have me race-fit in 12 weeks. You can imagine how well this worked out. So, the next time I used the tiny habits approach. My first tiny habit was to lay out my running clothes the night before and simply put them on first thing in the morning. When I eventually made it out of the house, my next tiny habit was to simply walk around the block for 10 minutes each day. 12 months later, I completed my first half-marathon — something I’d been trying to do unsuccessfully for over a decade.

The idea of making change through small habits isn’t new; it has been discussed and written about ad-nauseum. So why do we still struggle to implement them? In large part, because it feels silly to plan to do something miniscule and even sillier to reward it. When was the last time you congratulated someone for walking around the block for 10 minutes?

The key is to remember the tiny step is part of the larger goal. Your habits are a means to ends, not the ends themselves.

So the first step to succeed with tiny habits, is to find something you want to do regularly, then scale it back to be a tiny action.

It usually takes a few tries before you come up with something sufficiently small enough to be considered a tiny habit. If you feel the habit is so ridiculously small, it’s not actually worth doing – that’s a true tiny habit.

In my case, the true tiny habit was to floss only one tooth each night.

And step two? Hold it steady for a long time. It’s hard to think small to begin with; it’s even harder to stay small. My micro habit of flossing one tooth each night felt so ridiculously small, it hardly seemed worthwhile. After just one night, I was pretty keen to do more. But I know from past experience this wouldn’t end well for me. Enlarging my goals unrealistically fast just meant I would inevitably give up within a month or two. The key with a tiny habit is to stick to it long enough to feel bored with it for at least two weeks in a row. Then increase it, but only by about 10%. You only get credit for achieving the minimum, not going beyond it.

Hopefully your new year’s resolutions include implementing a good oral health plan like me, but the tiny habits approach can be used for any of your major goals. By starting small, you can attain big results.

If you would like some help getting started with some tiny habits for your oral health and wellbeing, contact us or drop into any of our practices for a friendly chat. 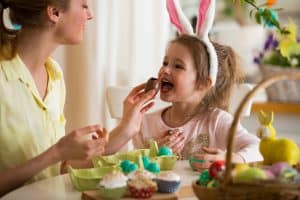 Why Mouthguards Are Important For Easter

Why are mouthguards important for Easter? Well, it’s a bit hard to eat Easter chocolates with broken teeth… No, we’re not suggesting Easter Egg hunts

How Your Dentist Can Improve Your Love Life

While it’s not typically something we think about in the moment, you should definitely consider whether you might be sharing more than just love when

Keep Your New Year Resolutions by Flossing One Tooth!

How Flossing One Tooth Can Help You Keep Your New Year Resolutions! Keeping my New Year resolutions is the last thing on my mind as